Shark Tank  Statistics are not positive for inventors.  According to AGN Media about “240,000 people apply to be on Shark Tank annually.  There are 23 shows with about four products per show. Do the math – it’s a .0004 percent chance of being chosen.”

{Don Debelak’s new book, Turning Your Invention into Cash is now available on Amazon for $3.49. Go to Amazon.com and enter inventions Don Debelak to purchase. From the author of Entrepreneur Magazine’s Bringing Your Product to Market.}

Statistics were included in an interesting article about Scott Houdashell and his partner Curtis McGill and their invention the Eggmazing, which is a kit for coloring Easter eggs, and is the number 3 selling product on Amazon.

Check out the story at  http://www.recordstar.com/news/20180224/beilue-eggmazing-inventors-are-looking-to-cash-in. 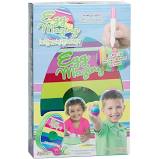 In October 2012 Taya Geiger was fed up after 12 years as a financial consultant at just the time her neighbor, Leah Tutin, came up with an idea for an baking kit. Putting their heads together they launched their product and today Scratch and Grain Baking Company has its products in over 5,000 stores, and sales are growing 500% per year.

T2 Design clients Marc Newburger and Jeffrey Simon invented the “Drop Stop”, a patented device that prevents cellphones, make-up, keys and food from falling into the gap between the car seats and the console.

These two inventors worked with T2 Design to launch their new product. With modest but respectable sales, this smart tenacious team presented their product on the ABC hit TV series “Shark Tank” and Lori Greiner, known as “the Warm Hearted Shark,” made a deal to invest in their company and take “Drop Stop” to the masses. The two inventors now regularly appear on QVC TV selling thousands of “Drop Stop” car accessories each time they appear and Greiner made it possible for their product to be sold on the shelves in over a thousand Wal-Mart stores across the country.

How to Cut Patent Costs